My first task was getting the transfers sorted. I was planning on having a three digit vehicle number, but I couldn't find any transfers that were small enough to fit. Really I should have just printed my own but I was feeling a bit lazy. The Chimera's are now C2 and C7. Leaves me some spare numbers for extra's!

I also added the Cadian gate symbol to each side of the tanks and then I used a skull surrounded by a wreath for the front hatch. I cut this transfer in half and tried to make it look as if it was meant to be there. 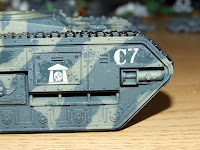 Once the transfers had been applied (along with copious amounts of MicroSol and MicroSet), I moved on to the weathering. So far I've only managed to get the paint chipping done, by using a small piece of sponge. It's such a simple and easy to achieve process that it annoyed me a bit when I looked at my Valkyrie and all the time spent painting each individual chip.

One of the major issues that I highlighted in my previous post about these tanks, was the paint that decided it didn't want to stay on. Well I grabbed the airbrush, put in a small amount of my main camo colour, Vallejo Model Air Black Green, and tried very carefully to fill in the gaps. I did mask around the top hatch area to avoid overspill though. As per usual, I forgot to take any photos of this, but hopefully you'll be able to see the lack of white/grey spots in the next photos. 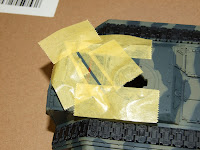 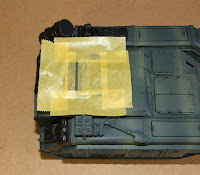 As well as tidying up my mistakes, I also wanted to add some roof markings to help allied air support figure out who was friendly. Out came the airbrush again, this time loaded with a few drops of Vallejo Model Air Fire Red. I masked off some narrow strips running from side to side across the top hatch and sprayed away. Once this had dried, I masked off a different line, and sprayed again. 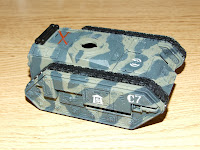 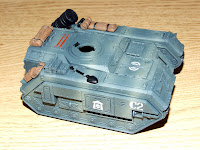 Here you can see the Chimera's in their current state. The roof markings are clearly visible, although I need to do a bit of tidying up as there was some seepage under the masking tape. You can also see the transfers and weathering. The stowage has been given a quick coat of GW Calthan Brown, and will get another coat before being washed with either Gryphonne Sepia, Ogryn Flesh or Devlan Mud, depending on how dark I want the shadows. The rest of the stowage has been given a coat of GW Basecoat Black and will get painted in appropriate (I hope) colours. 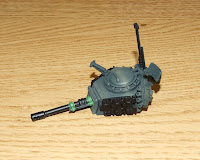 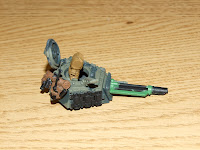 Finally, I had some time to work on the turrets. These got the same sponge weathering as the main tanks. The details on the gun barrels are being painted GW Warboss Green. The stowage was painted with GW Calthan Brown and the crew member has been given a coat of GW XV-88.

That's all for now. I've got some time off on Thursday so will be hoping to crack on again. Thanks for reading.

Those are coming along nicely, love the weathering you're doing. Looking forward to seeing more!

Looking Great! I'm a big fan of the chimera turret being shifted back. With all the stowage too they look ready for a long campaign!

Chipping looks good; are you using the GW sponge ? I'm trying various sponges on old bits of card and plastic laying around and not yet been happy enough to put sponge to tank.

One thing about the air recognition panels - why are they different ? Someone flying over isn't going to have the time to clock the difference. Jus' a thought.

@ Zzzzzz - I'm using some sponge I managed to salvage from my previous job(normally used for packing pots and plates). But I have used GW sponge before and still have a bit left. I have found it to be so much quicker for weathering tanks. That's a very good point, now I'm asking myself the same question. I may have to divide my Chimera's in to squadrons or something and keep the markings the same for each squadron.

Lookin' sharp - I particularly like the names, have that British tradition of the common theme/starting letter.